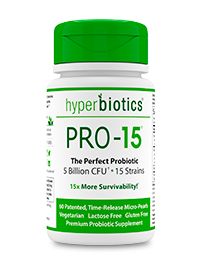 Probiotic supplements haven’t received a lot of attention until recent years, when their benefits have been demonstrated in repeated clinical trials and more information about them is available. While probiotic bacteria have long been known to have health benefits, the extent to which they help human gastrointestinal health hasn’t been common knowledge – but now, the cat is out of the bag. As a result, there are literally hundreds of different probiotic supplements out there, all claiming to be the best. And to be honest, we haven’t found all of them to be very good.

However, when we first learned about Hyperbiotics PRO-15 Probiotics, we could see that this was going to be a winner. Containing a top-notch blend of different probiotic strains, as well as prebiotic fiber, Made in USA manufacturing, and an impressive delivery system, PRO-15 quickly stood out to us as a high-quality probiotic supplement that stands head and shoulders above most of the competition.

This product is made by Hyperbiotics, an American probiotic supplement company with a mission: to provide high-quality probiotic products to people in order to improve health and make lives better. In addition to their products, they’re also involved in a number of charitable foundations, most notably Change For Women, an organization they started to advance women’s equality and human rights. Pretty impressive for a nutritional supplement company.

To learn more about what’s in Hyperbiotics PRO-15 Probiotics and why we rated it so high, read on.

Probiotic products all claim to do the same thing: improve your health by introducing healthy, beneficial bacteria into your digestive tract. But not all of them do it the correct way. Many probiotic products contain only a few million bacteria, and don’t do anything to ensure that enough of them survive their trip to the intestine.

Hyperbiotics, on the other hand, made all the right choices. Not only does it contain a varied list of different strains for multiple health benefits, but it also contains a unique delivery system: micro pearls that act on a time-release system, to make sure that the bacteria are protected from your digestive juices, as well as to ensure they are released slowly into the body, instead of all at once.

Here’s some of the ingredients and strains you’ll find:

All in all, Hyperbiotics PRO-15 Probiotics contains 15 different strains, and over 5 billion colony-forming units (CFUs). That’s important, as the more CFUs a product contains, the more bacteria are likely to survive in order to do their job.

How Does Hyperbiotics PRO-15 Probiotics Work?

Hyperbiotics PRO-15 Probiotics is meant to be taken as a supplement once a day. When the user takes a pill, the pill enters the stomach and begins to release the micro pearls containing the bacterial strains. Those strains are protected as they enter the small intestine and slowly start to get released as the micro pearls are broken down. Over the course of 8-10 hours, the probiotic bacteria enter the small intestine and start to colonize and flourish there.

Different probiotic bacteria help in different ways, from producing lactic acid to kill bad bacteria to helping the body synthesize certain vitamins. Others work as the intestines’ bodyguard, preventing bad bacteria from flourishing. Others trigger different reactions such as stimulating the release of certain chemicals in the brain, or creating a hostile environment for certain viruses.

How Safe Is Hyperbiotics PRO-15 Probiotics, And How Does It Taste?

After all this talk of bacteria, you might be wondering if this product is safe or not. That’s the good news: it’s totally safe. All of the bacteria in this product are commonly understood to be beneficial to the human body because all of them already are in the body. It’s just introducing more of what the body already understands and has a “relationship” with. And since many of them can also be found in common foods like pickled vegetables and yogurt, you can be sure that there’s nothing dangerous about it.

Here are the basics of the two different sides: for and against.

CON: Can take a few weeks for best results.

Bottom Line: Is Hyperbiotics PRO-15 Probiotics Worth a Try?

Sometimes it’s hard to parse which probiotics are good and which aren’t, since all companies want you to think they’re the best. But this company doesn’t even need to brag about themselves – they have “the goods.” It’s a great formula, an effective delivery system, and the company has great policies such as a no-questions-asked money-back guarantee. All of that adds up to a great product.

So if you’re in the market for a probiotic, you definitely owe it to yourself to try Hyperbiotics PRO-15.