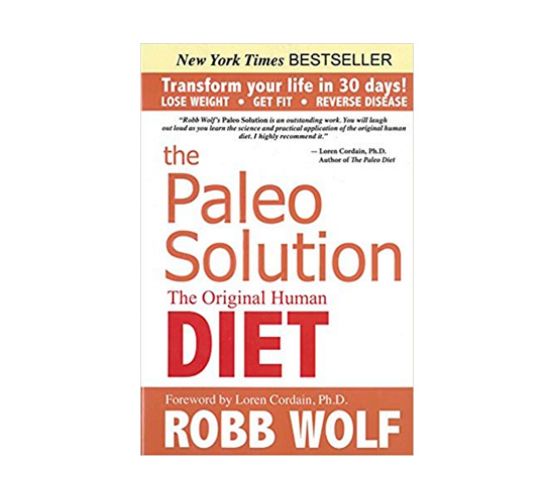 The diet world is pretty crazy. Over the last century, different programs and approaches have attacked weight loss from every imaginable angle, and to date there are literally hundreds upon hundreds of different diets to choose from. The sheer amount of choice, the often conflicting claims, and the spread of misinformation (and outright hoaxes) have made the diet world an even more hostile and confusing place to be. The Paleo Diet in particular has received lots of attention recently, but not all books do it justice or set out a well thought-out plan to follow it.

Enter The Paleo Solution. This book is a couple years old, but it’s one of the best introductions to the Paleo Diet we’ve ever read, and that’s saying something. With solid scientific explanations, detailed explanations of the body’s mechanics, and a helpful 30-day introductory menu to help ease people into the diet, it’s a solid primer on going Paleo that anyone can get into.

The book was written by Robb Wolf, a former research biochemist, medical editor, and two-time New York Times bestselling diet book author. In addition to writing, he’s also the host of a popular diet podcast (based on The Paleo Solution), has a series of seminars, and has presented nutritional talks to NASA and the United States Marine Corps. All of this shows that the author definitely knows what he’s talking about. While some other diet authors come from business backgrounds – and are thus clearly just trying to get in on making some money off a fad – this guy looks like the real deal to us.

To read more about what’s in The Paleo Solution and why it’s one of the best paleo books around, read on.

The Paleo Diet is pretty well known by now. Basically, it’s a low-carb diet that emphasizes foods that humans ate prior to the development of agriculture. The thinking is that by going back to what humans “originally” ate, we can get to optimal health and fitness.

Here’s some of the “ingredients” in this diet:

How Does The Paleo Solution Work?

As we mentioned earlier, you can take this diet as fast or as slow as you want. You can do what the author did, which was suddenly cut all grains out of your diet and start eating only the sorts of foods that ancient man ate – meat, fish, nuts, seeds, vegetables, fruit, and oils – while adopting a more active lifestyle, or phase it in slowly over a month.

By getting the majority of your calories from healthy proteins and fats, users are supposed to get better control over their appetite and get their body to start being more efficient with its metabolism and nutrition. Cutting out insulin-spiking foods like grains and artificial sugars are supposed to help people feel more clear-headed and more energetic, with more consistent energy levels throughout the day – as well as better sleep.

He also emphasizes getting more sleep – something many of us don’t get enough of – as it’s vital to an overall healthy and paleo way of living. The benefits include metabolic changes and more energy – which is key.

How Safe Is The Paleo Solution , And How Does It Taste?

It’s very safe, as long as you do it correctly. Strictly focusing on meats, vegetables, proteins, and nuts ensures that you’re putting nutrition-dense foods into your body, a major plus. Unfortunately when cutting out grains, many of us lose a significant source of vitamin B and some minerals, which can put us at risk for malnutrition. Getting enough paleo sources of those nutrients can help.

Pros and Cons of The Paleo Solution

Here’s our breakdown the advantages and disadvantages of this guide.

PRO: Solid information about hormones and diet, nutritional needs, sleep needs, and lots of stories of peoples lives who have been changed by the Paleo Diet, lots of references at the back.

CON: Goofy, casual tone can irk some people, goes a little hard on the “this will save your life” angle.

Bottom Line: Is The Paleo Solution Worth a Try?

The Paleo Diet isn’t for everyone, but if you want a solid introduction that explains the basic concepts in an easy-to-understand way, The Paleo Solution is one book you’ll definitely want to check out.